Yes it is, um, Charles, except for one thing. Microsoft’s translator app sucks donkeys. Here’s the actual Tweet:

Here’s an enhancement of that translation: 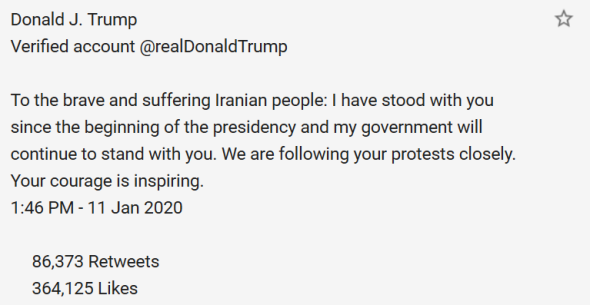 Charles Johnson, you blew it again, just like you did with the laptop menu board, the Air Cav Hat, the Tennessee State Flag, the Ohio State Flag and your credibility. 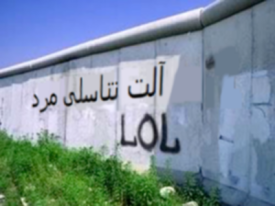 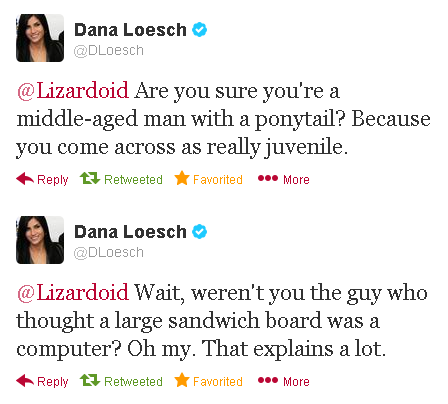 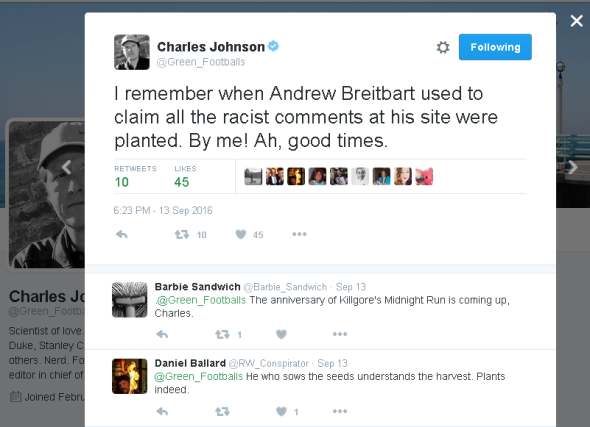 There he goes again, fighting a dead man.

Andrew Breitbart enhanced Charles Johnson’s blogging career by introducing him to the players who in turn promoted Little Green Footballs and escorted Johnson into the Big Tent with fanfare. Instead of walking away with dignity, Charles chose the path of the pissant. Not only did he shun his former mentors, he turned on them, created and promoted lies, reposted invented unsubstantiated claims, and astroturfed his benefactors. Then, like a true coward, he still plays the victim when others call him on his own hypocrisy.

On 13 September 2016, Charles tried once again to erase his own history of astroturfing, but let’s roll back the clock to 18 September 2009.

Seven years ago today The Flying Monkeys of Charles Johnson’s Little Green Footballs began an astroturf campaign against HotAir. With no evidence to back up Johnson’s accusation that HotAir was a racist website, LGF operative Killgore Trout paid them a visit while the moderators were asleep and provided the “evidence” himself by posting offensive racial comments and daring the moderators to delete them… beginning at 12:34AM and running to 2:01AM. You can read the full diatribe here, but here’s a snippet: 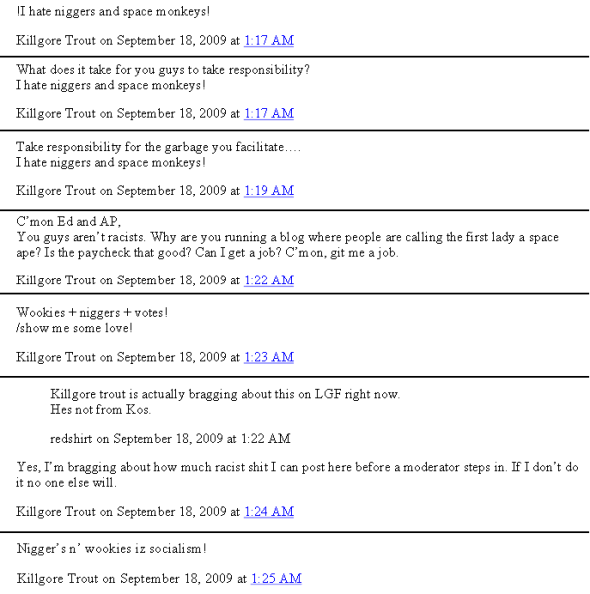 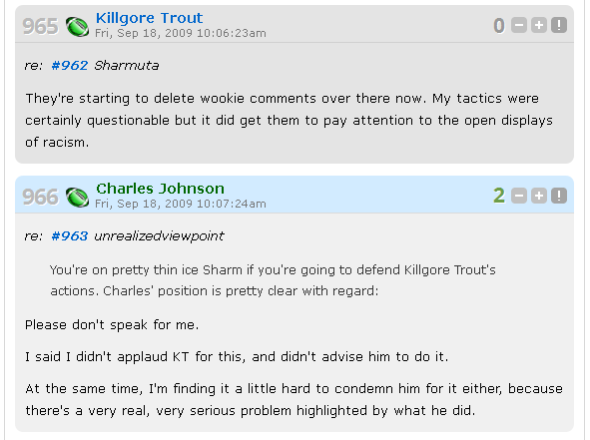 Charles Johnson continuously accused Breitbart and others of not policing comments on their websites. Little Green Footballs typically garnered a couple of hundred comments, and Charles employed volunteer “Monitor Lizards” to do it for him. Breitbart’s “Big Journalism” had well over ten times the number of comments per post than Little Green Footballs, so it was impractical to expend the effort to review and/or edit all of them.

And Johnson’s astroturfing didn’t stop there. 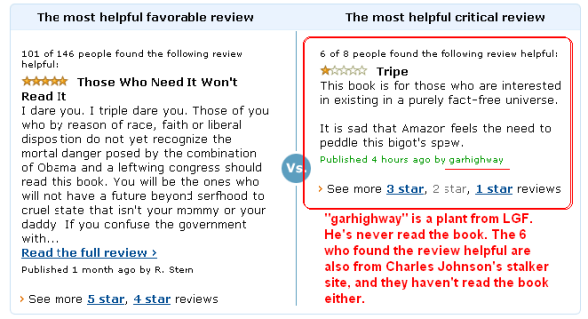 Johnson holds the 2 of Clubs and four Post-It Notes, then claims he has 5 of a kind. The first liar never has a chance, Charles. 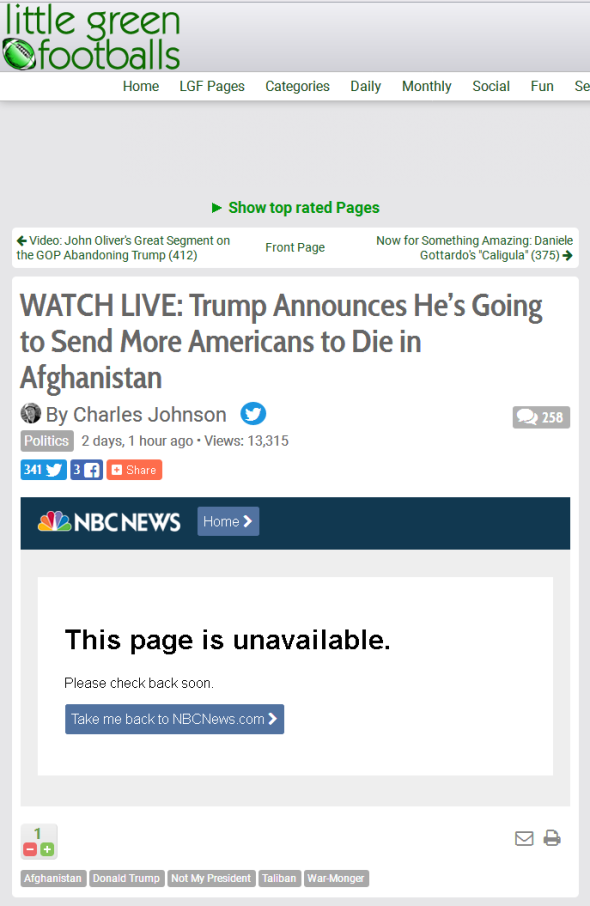 Charles F. Johnson is now a self-proclaimed military strategist who is regularly included in convo with the CIC and the JCS and apparently believes that the US Military takes high-school grads and ships them to killing fields in the outskirts of Kabul. Never mind that Johnson can’t locate Kabul on a map and believes that Afghanistan is one great poppy field that leads to the Emerald City in the Land of Oz, complete with flying monkeys and a little green witch who sold coffee in the 70s.

Charles. This is about exterminating Islamo-Facists who want to kill you, us and others, and to do it as far away from Culver City California as possible. (If you don’t believe it, see how long your Magical Jazzy Ponytail lasts in Ryahdh.)

Meanwhile, Charles Johnson threw this unedited comment down the Memory Hole a long while ago under this awesome graphic header:

It’s a bit more complicated than that. For all practical purposes, Bin Laden is the Taliban; he financed their government to the tune of $100 million, and used their country as a training ground for terrorist attacks. It’s a very clear example of a nation that supports and harbors terrorists.

And McElvoy makes this point as well:

Action against Afghanistan is a necessary pre-condition of a wider campaign against terrorism.

“Action against Afghanistan is a necessary pre-condition of a wider campaign against terrorism.” – Charles F. Johnson 7 November 2001

I first encountered Aziz Poonawalla during my dialogue of the deaf with the spitting, sputtering hateblogger Dean Esmay, as Poonawalla was and may still be a contributor to his blog. Poonawalla and I also have had several unpleasant exchanges, during which — as you can see if you read them — he didn’t demonstrate an overwhelming commitment of honesty or integrity. —Robert Spencer

Aziz Poonawalla is an anti-semitic muslim propagandist who’s been at it for a while, but that was then and this is now, at least according to Charles Johnson, and something happened. Now they’re best buds. END_OF_DOCUMENT_TOKEN_TO_BE_REPLACED

@chrislhayes Hey Chris – Mediaite didn’t credit us, but LGF is the site that broke this story yesterday. See: https://t.co/V5t71Gg6Gc 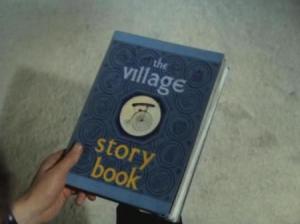 LGF2.0, aka The Blogmocracy, had already left a welt on the soft underbelly of Little Green Footballs, if only by existing and attracting ex-lizards who’d had enough of Charles Johnson’s fascist blogging style:

Yes, you can post comments and opinions freely here unless I disagree with them, and I won’t tell you when you’ve crossed the line or where the line is until you’re gone.

Ludwig Van Quixote was Charles Johnson’s darling when he penned an LGF Tutorial for new “hatchlings” and  gave his assessment of “The Stalkers” without having any idea who or what he was writing about. Here it is in its entirety.

END_OF_DOCUMENT_TOKEN_TO_BE_REPLACED

In 2007, Charles Johnson was all over the 2008 Presidential campaign, cranking out posts like a kindergartner on a 3-day glucose bender with a mouth full of wheat paste and safety scissors. Everyone breathlessly awaited each brilliant assessment of the candidates, and we weren’t disappointed.

The second “Update” was a headline lifted verbatim from HotAir & Allahpundit:

Charles Johnson blocked thread comments from public view on that post a long time ago, but the BRC has ways of resurrecting his hidden/memory-holed files. There was only one comment out of 510 posted by Charles Johnson on that thread, and here it is: 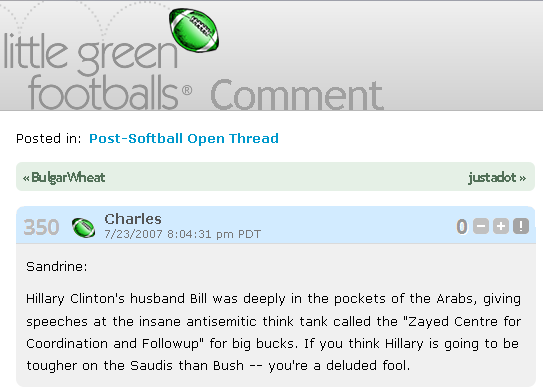 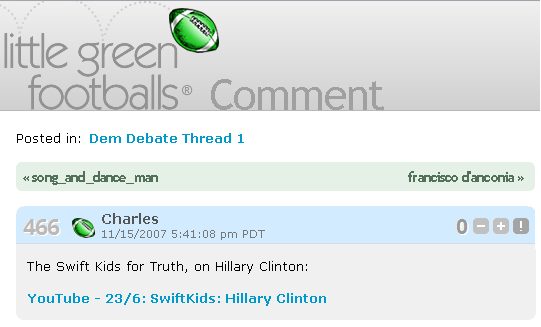 Here’s the YouTube video, as appropriate today as it was in 2007.

“There’s medical evidence that Hillary Clinton is a man.” That’s a bit of a stretch, but apparently Johnson found it credible and linked to it anyway. One year later, the metamorphosis was complete: 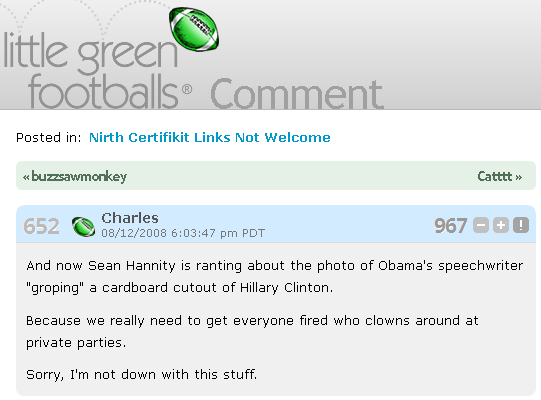 Apparently Charles IS down with this:

That’s former Obama speechwriter Jon Favreau on the left, and he thinks Donald Trump is “gross.”

Keep it real, Charles. Can’t wait until you jump on the Bernie bus and blow out the rear tires.