The graph amended by The Boiler Room Crew that documents how many times Charles Johnson and Little Green Footballs were cited in Anders Breivik’s manifesto still leaves a sting. Charles is tweeting his article attacking Greenwald for linking to the graph produced by the BRC.

Flashback: In Which Glenn Greenwald Smears Me by Citing a Faked Graphic at a Far Right Hate Site http://t.co/luAus01VH7

Charles keeps claiming it was a fake graph, but any person who scans Breivik’s manifesto can see that LGF and Charles were cited in his work. No amount of denial by Charles can change the facts.

[Update: The BRC did not create the original bar chart of Breivik’s influences, but modified the one dispersed by Think Progress which omitted Charles Johnson and LGF from the tally. Here is a pie chart using the same figures provided by Think Progress, previously posted here: 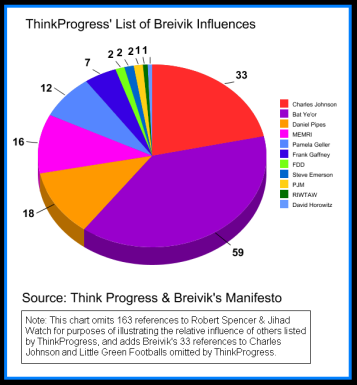 There’s no question that Charles F. Johnson was No.3 on Breivik’s Admiration Hit Parade after Robert Spencer and Bat Ye’or. Breivik’s Manifesto may be safely downloaded as a .pdf  here:

Yeah, We Fact Check Yer Ass, and Wonderboy’s Got It Sussed.

The stupid git that Wonderboy “Sergey” refers to posted a link to the “manifesto” that Wonderboy didn’t seem interested enough to click on, so I’ll make it easy for him.

What is telling about Wonderboy’s Self-Important-LGF-Subsidized-Cached-ProtoBlog is that it took him a mere 3-1/2 hours to post his response, hardly enough time to consume the diatribe of the mass-murderer, let alone to verify that the mass-murderer linked repeatedly to Charles Johnson and Little Green Footballs, as explained in this post.