Apparently coming off a month-long bender, and blowing through 72oz of hand lotion and 160GB of Tivo’d Fox News broadcasts, LudwigVanQuixote returns!

There is great jubilation in the lizard kingdom.  Heck, CJ was excited enough to stutter:

And Jamesfirecat did, um, what he does: 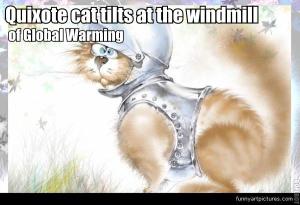 UPDATE by Jordan Duram: Indeed we are. Here’s his return comment: 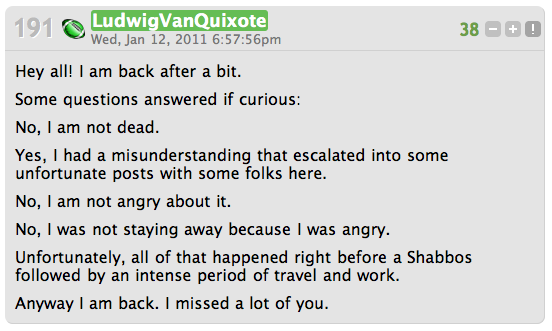 And we missed you too, Ludwig.

It’s that time DoDers!  Get ready to vote for LGF’s most idiotic display for 2010!  And as promised, the stakes are a bit higher for this round, as the winner will have the award named after them (to be used henceforth).

In spite of a few recent distractions, I used my memory of all things LGF, scoured The Blogmocracy archives, asked for some help The Boiler Room crew along with fellow DoDers to compile a list of individual finalists.  There were many good examples that didn’t quite make the cut (like dragonfire1981’s LGF Page fantasy on presidential assassination, and b_sharp‘s one-uping of Ludwig, warning readers not to picture the sticking of “Malkin’s balls into Limbaugh’s mouth”).   I’m sure I completely missed a few other good candidates too, but hey, I’m doing my best here.

Note:  This poll software is a 3rd party thing, so there is no way for the admin at DoD to determine who voted for who.  This also means that our LGF lurkers have nothing to fear if they want to participate in the voting themselves (don’t let Killgore scare you; go here if you’re really that worried about it).  The poll is set to block repeat votes by cookie.  Voting will remain open for 24 hrs.

Also, in a change from the last two polls, results will not be publicly visable until all the votes are in and the poll closes (like in a real election).   This isn’t an attempt to hide any funny business, rather, to prevent it (I got the impression that this knowledge was effecting the outcome).  Like I said, the stakes are high here, and we really do want the best lizard to win.

In LudwigVanQuixote‘s long, deranged essay he calls the women of Fox News “gutter sluts”, for using the power of their boobies to promote their evil propaganda.

SpaceJesus hopes that Utah secedes, ’cause he thinks it’d be “fun” to put down a rebellion

Jamesfirecat, at the Stewart/Colbert rally (?),  represents LGF with a, um, “sign”.

Killgore Trout, out of food stamps and obviously starving, dines on the slug’s leftover kale.

SanFranciscoZionist, issuing her stern opposition to the use of “dhimmitude” as a real word, unwittingly insulting CJ (who arguably did more to popularize its use more than anyone).

Charles, for seeing neo-Nazi symbols in the Tennessee state flag.

Gus 802, chiding DoD for posting on Christmas eve and Christmas day, after posting 31 comments and an LGF Page over the same time span.

Dark_Falcon, for one of many examples of working “lizards” and “trolls” into fanciful Dungeons & Dragons scenarios.

We’ll begin the rounds of nominations for this easier category here in this thread, and add/delete nics off the list after discussion. This is a good category to start with, as many have jostled for the top spot over the past year:

Feel free to add any other nominees you feel are worthy in the comment section, along with rationale if you can provide it.  Also, I still haven’t come up with a clever name for the award.

[Replaced proprietary image with a non-copyrighted one. — Briareus]

After the recent sacrifice of my sockpuppet, along with being cleverly IP blocked yesterday, I’m sure CJ and the lizards are now hoping that maybe, just maybe, they can take a breath and not worry about what I might be able to contribute to DoD today.

So, did I get myself a new IP addy, or even a new sock? Switch computers? Nope, I’m still me, rockin’ the super slow VAIO laptop, surfin’ in IE and broadcasting from my moderately priced tract castle. It turns out that these modest resources are all I need, because I still managed to spot this rather cryptic comment from ‘jamesfirecat’ in last night’s open thread: 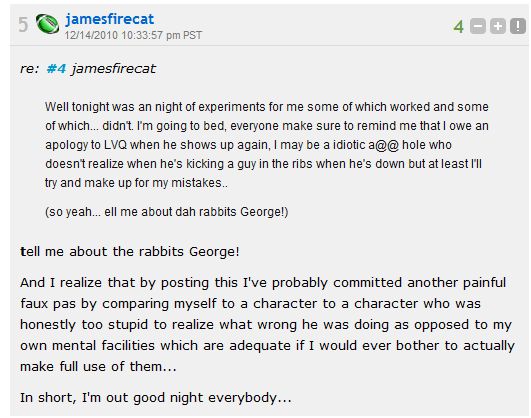 Those who are paying attention to this reality show know that ‘jamesfirecat’ thinks he’s in charge of a section of the lizard armory, and is eager to pass out cyber weaponry to the fellow LGFers in the form of…wait for it…lolcats images.  It is unclear whether this troubled flame warrior was exiled from icanhascheezburger, but he definitely stays busy whipping those pathetic (albiet cute) image urls.

Anyway, what the heck is he talking about?   What experiment?  Then I thought that if whatever it was “didn’t work”,  perhaps we may be able to find it in the memory hole.  It’s been a little while for me, but I do remember leaving a few survival goodies at base camp, so I put the boots on and dove back in.  And what do you know, jamesfirecat wasn’t kidding around: