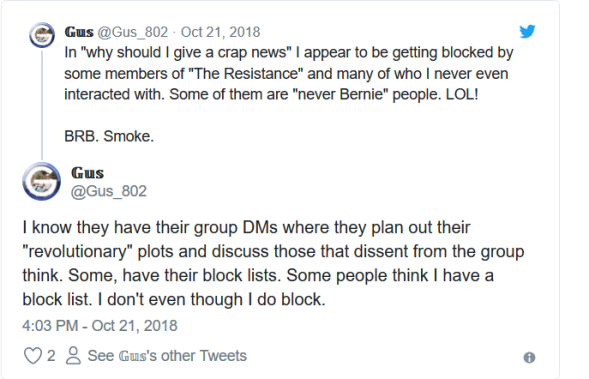 So El Gusano Pobre complains about being blocked by people “who I never even interacted with.” Hunh.

A quick search through the BRC Archives suggests Gusano may be telling the truth, but he had access to one and he certainly used it. More than one account on that list whose owners never Tweeted to @Gus_802 were instantly blocked from reading his Tweets directly. Did he keep a block list? No. He kept the link and undoubtedly contributed to it.

That list of Twitter accounts was compiled by Furious Burkha in 2012, and comprised those contrarians she deemed unworthy, their followers, and those they followed. With a bigoted algorithm like that I’m amazed that the list didn’t morph into thousands, but then again, she was never the sharpest bulb in the LGF Crayon Box. 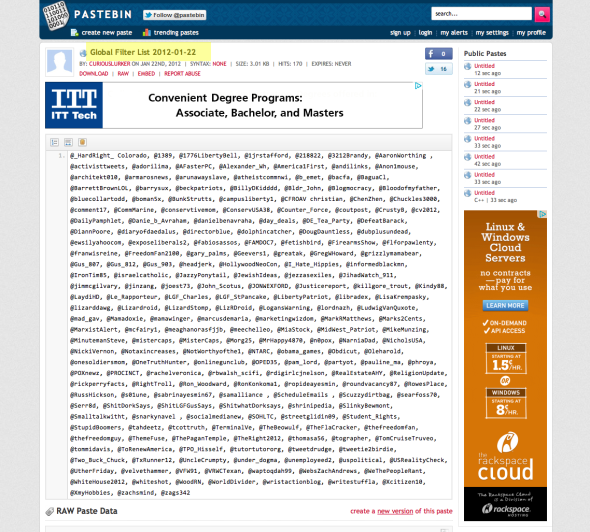 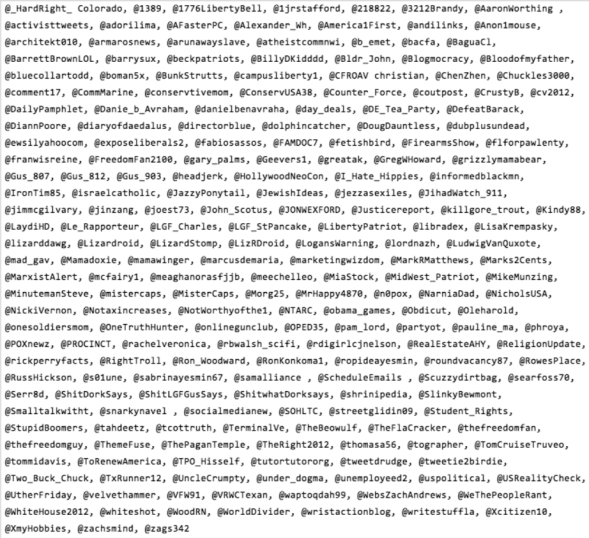 This is the first of a series of at least 1 year end statistics post to be published during the next several days.  This one focuses on changes to the LGF all-time commenter rankings.   For the first time since January 2009, when MandyManners passed the already banned babbazee to assume the top spot, there is a new record holder.  Around December 19th, Gus 802 surpassed MM and now squats alone atop the commenter pile, littered such as it is with the bodies of 16000 blocked accounts.  The current top 20 all-time posters are: 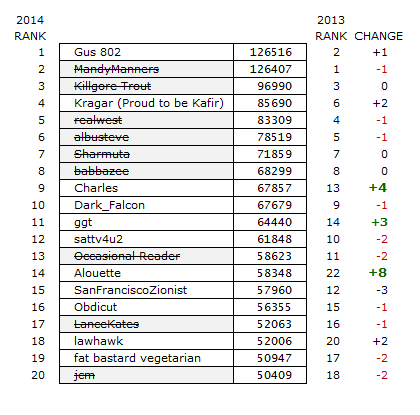 A couple of things of note:

Gus 802 – Beyond the Valley of Obsession 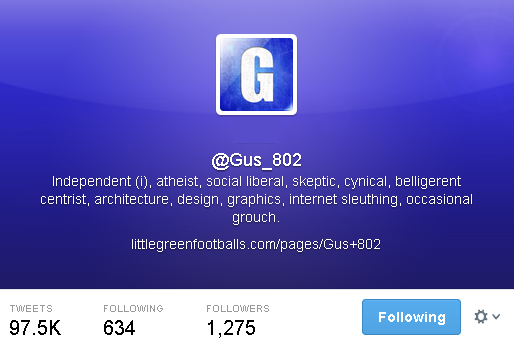 Yep, that’s Gus’ Twitter Banner (note the ChuckButton influence).
It’s no secret that Gus is a prolific commenter on Little Green Footballs (previously documented on Diary of Daedelus). With the advent of Twitter, Gus found a new venue, and predictably became just as rabid as he is on LGF.

The BRC decided to re-open the Gus 802 Statistics Vault recently, and what we found was amusing, amazing and disturbing. END_OF_DOCUMENT_TOKEN_TO_BE_REPLACED

A Very Gus-y Christmas at LGF

As ChenZhen recently pointed out, just three short years ago Gus got out the step ladder, mounted his high horse and passed judgement on us “pathetic sadsacks”:

while simultaneously posting 30 comments and 1 link/page/thread thing over at LGF.

So what did Mr. 802 do to honor/respect/keep the holidays this year?  Why he had not one but two posts promoted to the front page!    The first concerned an innocuous Donald Trump tweet about Pope Francis.  Not sure what moral lesson was to be had with that one.

But for the second, he worked himself up into a fine lather of righteous indignation because someone officially connected to the GOP and NRC [sic] had dared send out a tweet implying…  wait for it…  that Sandra Fluke has flabby arms.  ZOMG!1!!eleventy  This, he stated, constituted another “Great moment in Republican rebranding”, echoing one of his master’s lamer memes.

So who is this official spokesperson for the GOP and NRC? It’s someone using the Twitter handle @GOPFashionista.   And Gus’ proof of “official connection”?  This screenshot: 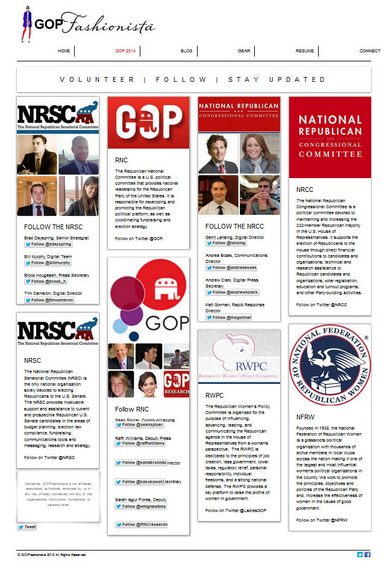 But it’s always wise to read the fine print. And it’s right there, on the very page he cited, in the lower left corner: 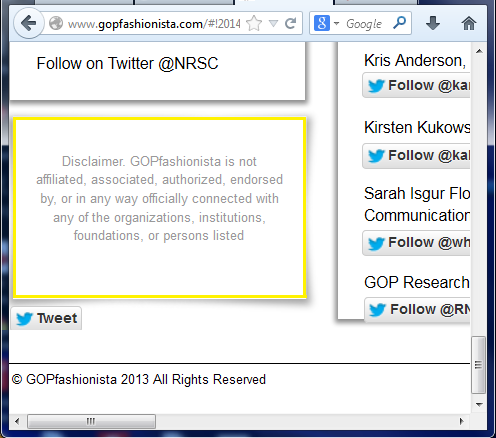 But at the Swamp, they don’t let facts get in the way of a good pile-on.

ChenZhen: As pathetic as that was, it just the tip of the proverbial iceberg.  Now there wasn’t much guessing going on in that previous thread, unfortunately, but I don’t think anyone could have called this. In addition to the aforementioned threads, here’s the final tally for Gus’s Christmas as prepared by Apollo:

And it’s not like he banged it all out in the morning before heading out to be with the family or something (not sure that’s possible given the sheer volume, but…). If you want to work in some time of day info, he puts in pretty full days on Twitter:

Here’s one of the tweets, and this probably sums it up the best:

Cheapo chicken pot pie and black coffee. No TV and no Christmas music. Just another day.

Should we feel bad for this guy? I mean, this is kinda sad, actually.

On 6 September, actor/comedian Albert Brooks posted a Tweet, dripping with classic Brooks sarcasm, and it accidentally altered US Foreign Policy.

Before Brooks’ “Tweet Heard ‘Round The World” came screaming into Secretary of State John Kerry’s left earbud and embedded itself into his only frontal lobe, Brooks’ sarcasm roared by just inches above the greasy balding head of Our Boy Gus_802. 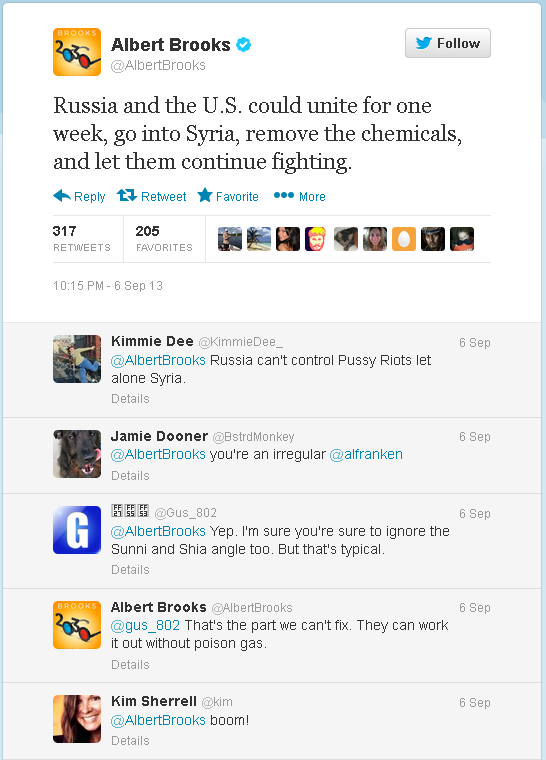 Yeah. Brooks had to ‘splain his Tweet to Gus. “Boom” indeed, and the rest is #Rumpswab history.

Charles Johnson believes he’s leading some New Age Renaissance movement. He views himself as a great philosopher. One of his pupils,  Gus 802 clearly has learned from his master. He shows off his deep thinking.

What a great analytical thought. Gus 802 is on his way to be a Chuck style philosopher.

It would be so sad, if it wasn’t so funny!