← What are we gonna do with you, Charles?
Charles Johnson & Little Green Footballs pay tribute to the heros and the fallen of 9-11. →

Yep, it’s true. On 20 September, dimheads are gonq to go all ‘splody about an innocuous life and safety warning enacted by FEMA in coordinations with the FCC:

The Federal Emergency Management Agency (FEMA), in coordination with the Federal Communications Commission (FCC), will conduct a nationwide test of the Emergency Alert System (EAS) and Wireless Emergency Alerts (WEA) on September 20, 2018. The WEA portion of the test commences at 2:18 p.m. EDT, and the EAS portion follows at 2:20 p.m. EDT. The test will assess the operational readiness of the infrastructure for distribution of a national message and determine whether improvements are needed.

The WEA test message will be sent to cell phones that are connected to wireless providers participating in WEA. This is the fourth EAS nationwide test and the first national WEA test. Previous EAS national tests were conducted in November 2011, September 2016,  and September 2017 in collaboration with the FCC, broadcasters, and emergency management officials in recognition of FEMA’s National Preparedness Month.

The EAS is a national public warning system that provides the President with the communications capability to address the nation during a national emergency. The test is made available to EAS participants (i.e., radio and television broadcasters, cable systems, satellite radio and television providers, and wireline video providers) and is scheduled to last approximately one minute. The test message will be similar to regular monthly EAS test messages with which the public is familiar. The EAS message will include a reference to the WEA test:

“THIS IS A TEST of the National Emergency Alert System. This system was developed by broadcast and cable operators in voluntary cooperation with the Federal Emergency Management Agency, the Federal Communications Commission, and local authorities to keep you informed in the event of an emergency. If this had been an actual emergency an official message would have followed the tone alert you heard at the start of this message. A similar wireless emergency alert test message has been sent to all cell phones nationwide. Some cell phones will receive the message; others will not. No action is required.”

Now guess who spazzed out over the text in bold above? You got it. 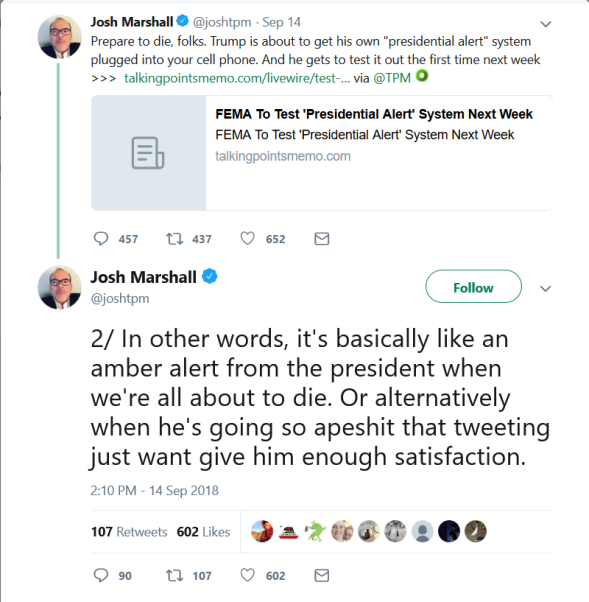 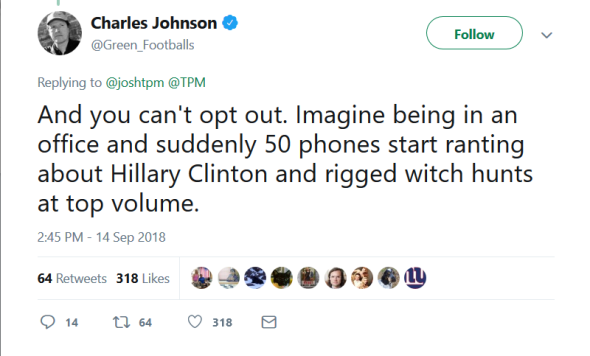 Charles Johnson has never been employed in an office of 50 people. 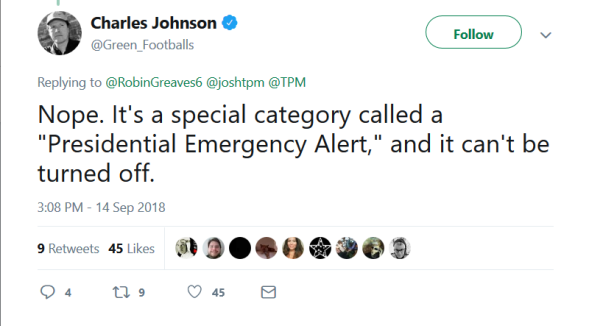