← We’ve seen this story before.
General Seti puts the Race Detective in a dilema →

Did Charles Johnson inspire Chris Harper Mercer? Update: Sick picture put at LGF and Mercer was not a Republican!

LGF is in full celebratory mode this evening. 26 year old Chris Harper Mercer committed a terrorist shooting at Umpqua Community College in Oregon. Witnesses report he asked people to stand up and state their religion. Those that answered they were Christians, were shot in the head.

The gunman who opened fire at an Oregon community college was forcing people to stand up and state their religion before he began blasting away at them, survivors said Thursday.

A woman who claimed to have a grandmother inside a writing class in Snyder Hall, where a portion the massacre unfolded, described the scene in a tweet.

Kortney Moore, an 18-year-old student at Umpqua Community College who was also in the room, told Oregon’s News Review that the shooter was indeed on the hunt for Christians.

Charles Johnson is ignoring the reports of Christians being killed. Instead, Mr. Toot has a post attacking Jim Hoft and tweeted this out.

And of course, right wingers are already starting to invent conspiracy theories about the Oregon shootings.

Witnesses to the shooting are now Rightwing Conspirators. according to Charles. The question I have is, why is he downplaying the reports of the shooter’s motives?

Could it be that Chris Harper Mercer was a lizard in good standing over at LGF? Could he have been a follower on Twitter? I am asking these questions because Charles Johnson bashes Christianity everyday on his blog and in his hateful tweets. It’s very possible that Charles inspired the shooter. This would not be the first time LGF influenced a mass murderer.

Update: This sick picture was posted at LGF and got 9 updings. 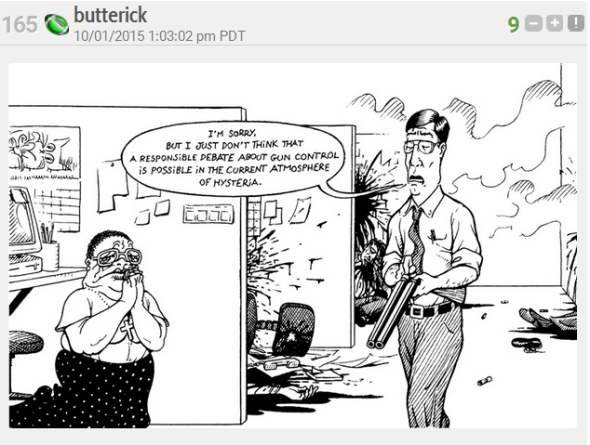 In a huge blow to Charles Johnson, It turns out that Chris Harper Mercer, was not a Republican!

Thursday’s horrific mass murder at Umpqua Community College in Oregon has everyone looking for answers and motives to how a young man became a monster–and some are jumping too quickly to conclusions.

Naturally, the media and other liberals have claimed the shooter, Chris Harper-Mercer, a 26-year-old, biracial man, was a Republican

At one point in his life, Mercer tagged himself as a Republican on his dating profile. Within hours after the shooting, CBS, Raw Story, Mediate, Heavy, The Daily Beast, and scores of Twitter users pounced all over this apparent revelation.

However, Red Alert Politics has discovered Mercer was in fact not a Republican or Democrat. He was a registered in Oregon as an Independent.

Oregon is a closed primary state, so registered Independents can not vote in the primaries of either party.

This is  a huge blow to Charles Johnson’ narrative that this guy was a Conservative or Libertarian.  What is still unknown is whether Chris Harper Mercer was registered at LGF or followed Charles on Twitter? Thus he potentianlly could have been influenced by the anti-Chrsitian rhetoric espoused by Charles into committing action against Christians. Charles needs to answer these questions.

307 Comments on “Did Charles Johnson inspire Chris Harper Mercer? Update: Sick picture put at LGF and Mercer was not a Republican!”