← They’re hoping for more self-flagellation from you.
Charles engages in Catholic bashing →

They All Look Alike to Charles Johnson.

In the realm of politics there are good arguments, and there are blatantly inane bloviations. This is one of the more vapid kind. Charles Johnson and others (including Glenn Beck) claim that the producers of a cable show entitled “The Bible” cast an actor to play the part of Satan who they say is a dead-ringer for Barack Obama.

It’s no surprise that Charles jumped on the bandwagon with his post “History Channel’s Incredibly Obama-Like Satan.” Everyone knows that Johnson’s a professional post-game drum major leading the LGF Marching Band to the yellow buses that already left the stadium, but we’re gonna help him out anyway. 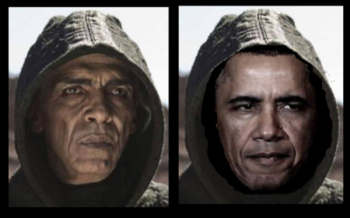 Despite the fact that every theatrical endeavor employs actors, there are some similarities between the actor portraying Satan and President Duffer, but not many.

Edward Jame Olmos might be a closer match to Satan, but The Race Detective should have the last say.  Charles Johnson won’t “Stand And Deliver” because he’s already made clear his opinions about hispanics/latinos.

This one’s a close call, but Pelosi’s a contender. If she weren’t female, she’d be male. Either way there’s enough of a resemblance for Beck and Johnson to nod heads in agreement.

John Boehner and the actor who portrayed Satan share some facial characteristics and go to the same barbershop. That’s enough proof for me. 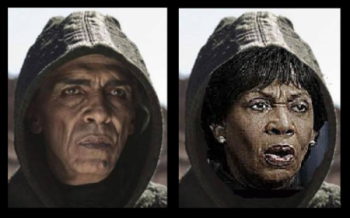 Looks like the folks at The History Channel might have been aiming at Maxine Waters instead. This is not a coincidental match up. Different sexes, different races, both playing  Satan. Go for it, Charles. 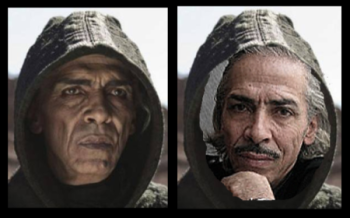 This is my best pick for the coincidental resemblance convergence. Mohamen Mehdi Ouazani looks EXACTLY like Charles “fuckface” Johnson.

58 Comments on “They All Look Alike to Charles Johnson.”