The Ruse and Fail of Little Green Footballs: Part III – The Bannings

This is Part 3 of a monograph about a blog named Little Green Footballs and its founder Charles Foster Johnson. Click the links below for related posts. They will be updated as the series continues.
Prologue
Part 1 – Overview
Part 2 – The Ascendance of Charles Johnson and LGF
Part 3 – The Bannings
Part 4 – The Flounces
Part 5 – The Turnaround
Part 6 – Current Events & The Future Of LGF
Bonus track: Revisiting Rathergate 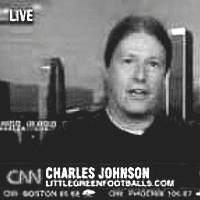 Every blogger, regardless of the size or popularity of his/her blog, eventually will have to deal with a troll. It’s no fun when someone shows up with the intent to irritate everyone.[1]

No one would claim that Charles Johnson never banned anyone from trolling on LGF. Indeed one unpopular commenter was banned in April of 2005 for his/her continual “baiting” of other posters, often creating an incredibly hostile atmosphere. In addition, there were some posters who for one reason or another went overboard (especially when discussing Islam and the Middle East) and were told that they might be happier elsewhere. Fair enough.

In the early years of LGF, dissent from the prevailing opinion on a topic was certainly not discouraged. There were several posters who regularly argued the contrary point of view, but for the most part such argument was not mean-spirited. Real trolls who came only to post incendiary comments were greeted with scorn, and members were advised to “GAZE” upon the troll (ignore it) or to discuss “Mr. Holland’s Opus” in depth until the troll departed.

Bannings were sporadic, and usually well deserved for egregious behavior by a commenter. However, sometimes the ban stick was used indiscriminately, with little or no warning. A pattern was emerging that left a lot of fans of Little Green Footballs scratching their heads.

One harbinger was the infamous and inexplicable “Night of Long Knives”[2] Charles Johnson had an altercation with a vocal commenter about unnecessary profanity. When others voiced support for the dissenter, that he had a right to his opinion (profane or otherwise) they too were banned without discussion. Invisible lines had been crossed, and paranoia set in among the LGF community. Nobody knew who was going to be next, because the rules had changed, and no one knew what the new rules were.

In short, the “Night of Long Knives” was a small revolution in support of free speech on Little Green Footballs. Charles Johnson had been openly criticized on his own blog by his own lizards, and he didn’t like it. Rather than accept the dissent and let the lizards police their own, Johnson chose to lop off the heads of his critics. But he went further than that.

Not only did he ban his critics, he banned many silent lurking lizards just for logging on and reading the thread.

The purging of his detractors continued, albeit not so dramatically. However, in 2009 Johnson began to systematically eliminate conservative posters, many who had been with LGF since 2004. He began banning anyone who disagreed with him on any topic, often without warning and with transparent flimsy excuses.

According to one long-time poster at LGF, it was confirmed to him by several others that two of the “monitor lizards” had a long list of people they wanted banned. They kept spreadsheets of the comments and up/down dings by the people they targeted for quick reference. The monitors would then coordinate with their groupies to taunt those folks until a targeted person fought back, at which point they would pile on and scream bloody murder. Why Johnson chose to allow these sociopaths to destroy his community is open for debate, but likely both greed and avarice were involved.

“Others have confirmed to me that Charles was directly involved in this as well, emailing his sycophants to taunt various posters to try to drive them to say something he could use as an excuse to ban them.”[3]

Before we delve deeper into the bannings, there is another topic that needs explanation.

One of Johnson’s frequent tactics was to post a “secret thread,” a private post, viewable only by those registered at Little Green Footballs. These posts allowed loyal lizards to defame outsiders, plot blog strategy, and be themselves within the confines of an internet wall. Only the approved elite lizards could view the “secret threads.” But there was a catch.

Johnson knew that outsiders were reading his “secret threads” because they posted them on other websites. He was also tracking and collecting IP addresses in order to identify sock puppets, i.e., those with multiple accounts on LGF posting comments under different names. He called this his “Correlator Tool.”

In order to combat this breach of secrecy and to identify socks, Johnson created what The Boiler Room Crew identified and referred to as “Comment 17.” In EVERY private thread, Johnson embedded a number that he could use to identify the lizard who copied and posted it elsewhere, and then track, ban and block the offender’s IP address.

Eventually, a Diary of Daedalus commenter (Internet Septic Tank Engineer) pointed out that Johnson had inadvertently blocked all North American Universities and the entire country of Bolivia from viewing LGF. Johnson realized that his strategy of generic mass IP tracking and blocking didn’t work very well.

Of all the bannings that took place from the first public banning in April 2005 and the day the final real conservative turned out the light and closed the door, there was no banning that was more mean-spirited and repugnant than that of blogger Zombie in 2009. For many long-term conservative lizards it was the treatment of Zombie that pushed them over the edge.

Zombie was a long-time member of LGF and earned the rarely conferred status of “LGF Operative.” This “Operative” was instrumental in revealing the shady and seedy side of the anti-War, anti-Israel leftist movement in the Bay Area by infiltrating rallies and posting condemning photographs with brilliant commentary. Charles gave Zombie’s work center stage, including an excellent photo essay on deception in photojournalism. Zombie’s work was as much a part of the success of LGF as anything.

As Charles Johnson veered left, Zombie stayed put, and dared to contradict the LGF versions of news stories with brutal facts and logic. Johnson had a problem: how to get rid of one of the most popular contributors to Little Green Footballs. Zombie had one of the highest “Karma Points” of anyone, and his/her comments often received dozens of “updings.” Zombie was a rare prize, a golden goose.

At the same time, Charles was attempting to establish his new liberal bona fides and was busy trashing conservative bloggers regardless of previous alliances. [See Part 2 of this series.] Many former LGF members congregated at Zombie’s forum (zombietime) to vent their frustration about LGF’s blogmaster and his treatment of many long-term friends. Note that the thread posted by Zombie had nothing to do with Charles Johnson, and didn’t even mention him or LGF. It was the commenters who brought up his name.

The genesis of this particular event was the work of LGF member Irish Rose. This self-appointed defender of Johnson stomped into Zombie’s blog on 4 October 2009, read comments (posted days before) that were less than complimentary to Charles Johnson. She left comments castigating Zombie for allowing people to “be mean” to Johnson, and returned to her home base at LGF to lie about it on a private thread. [4] [5]

“I went over to Zombies’ blog this morning to leave a comment about all of the posts there bashing Charles and LGF. I told her I was disappointed in her and I reminded her that Charles has been a good friend to her.

She removed my post, and left the hate posts up.

In fact, Zombie had not removed Irish Rose’ comment. The real crime to Charles was that anyone would allow comments from others disparaging him on their own blog. In Johnson’s view, the owner of any blog is responsible for ALL comments posted on that blog, and that is the crux – that EVERY blogger should follow the LGF method, and if they don’t moderate or delete offensive comments, they’re evil by association. This is a recurring theme with Johnson that will be explored later in this series.

Once Johnson gave his imprimatur to bash Zombie, the sycophants piled on, and from then on, any mention of Zombie was verboten. Perhaps the most telling comment from the private thread is this one from Charles Johnson himself:

“I would appreciate it if people don’t discuss this in public threads, please.”

In other words, once they’re banned, their names were not to be mentioned, and more invisible eggshells piled up in the doorway of Little Green Footballs.

The only other Lizard who had a larger worldwide influence was Fjordman. Johnson promoted him as one in the forefront of the battle against Islamist extremism, yet once Anders Brevik committed his brutal atrocities in Oslo, Johnson blamed it all on fellow bloggers Pamela Geller and Robert Spencer, even though Johnson and Little Green Footballs garnered third place in Brevik’s “Manifesto,” beating out Geller by a factor of 3.

“Think Progress” conveniently left out Little Green Footballs from their bar graph of Breivik’s top influences giving Johnson a free shot at his former friends. There is no way to do justice to Fjordman’s posts in such a brief monograph as this, but it illustrates the character of Charles Johnson.

Was Johnson a culprit, an instigator, complicit in the Oslo massacre? Of course not, and neither were Geller or Spencer. It’s like arguing that the Beatles were responsible for the Manson Gang’s murder spree for recording “Helter Skelter.” It just isn’t true, even though Johnson claimed it to be. Guilt by association makes logical sense in Johnson’s world.

In summary, Charles Johnson has blocked/banned over 15,800 registered lizards from commenting on LGF, with more than 10,000 accounts vaporized in 2011 alone. Several prolific commenters had every one of their comments, numbering in the tens of thousands, deleted as if they’d never existed, making it virtually impossible to discern the reasons for their dismissals. [6]

[Caveat: In no way is this monograph comprehensive, nor is it intended to defame or otherwise impugn Charles Johnson, Little Green Footballs or anyone associated with any blog. Any and all conjecture should be intuitively obvious to the casual observer. This is not Wikipedia; however, if any readers find fault with this monograph, please leave comments with verifiable backup and we’ll correct factual errors.]

[1] A “troll” is internet jargon for a person who leaves inflammatory and/or insulting comments on a blog in order to disrupt civil conversation. A commenter who merely states a contrary opinion is not usually considered to be a “troll” on most blogs (excepting LGF).

[4] Full transcript of the 4 October 2009 “Secret Thread” was captured by AvidEditor. Irish Rose’ backstabbing begins at Comment 176. Cato the Elder called her on it at Comment 400. http://avideditor.wordpress.com/2009/10/06/lgf-private-thread-and-does-irish-rose-sing-like-this/

113 Comments on “The Ruse and Fail of Little Green Footballs: Part III – The Bannings”