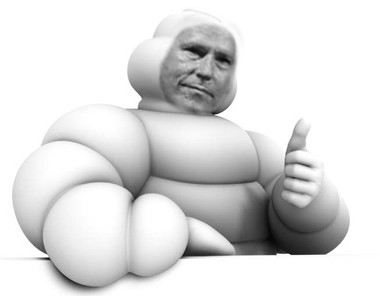 It’s always an interesting day on @Lizardoid TL. One can see convicted felons, internet terrorists, and even the occasional curious reporter! Kris Holt humbly tweeted Johnson today after reading through the #Twittergulag hashtag (funny how when you search that hashtag he just pops right up!).

Well, the mighty one pounced on the chance to do some PR for the fat clown! He and SemperbanU (of Twitter tantrum fame at defunct and slow loading littlegreenfootballs.com) were chomping at the bit to do the Round Mound of BeClowned a solid and represent for him!

to which Kris eagerly followed and responded:

Oh, and yes he and the mighty one did exchange some EYE POPPING emails. I’m sure Kris will check under his bed at night now that he knows the names of some of the bottom dwellers that inhabit Chuckies swamp, and just who (cough-Anders Breivik-cough) has cited Chuckie as influences over the years (moreso that he deleted and obstructed his posts-further damaging the victims in the crime).

So, DOD, grab your popcorn, add some extra butter and yell at the movie screen for Chunk to buckle up! Da Dancin’ Clown’s got another show to perform! I was a little ambivalent about where Holt might take this, but I thought “either way-it can’t hurt to present him the facts and see what conclusion he draws.” So that’s where we’re at. I’ve asked his permission to publish the contents of the email here (isn’t that nice of us? We show respect to others here), and if he gives the ok I will gladly post it for all of our netizens to see.

Until then enjoy the little Photoshopped ‘toon and HAPPY HUMP DAY!

BTW one of the big stories of today is that Eugene Volokh will be legal counsel for Aaron Walker in his frivolous lawsuit in Maryland….PRO BONO, FOR FREE, FOR NOTHING. Give the big fella some tweets and some love for defending the First Amendment, why doncha!

Charles Johnson had another failed prediction last night. He claimed a massive turnout was going to help Barret against Gov, Walker. Instead Walker won by 53%-46%. Rather than own up to his failed prophecy, Charles tweets about Creationism.