Since LGF has become a Marxist Pro-Islamic blog Charles has decided to tolerate islamic extremism. The most radical of the islamists at LGF is ProLifeLIberal. He pretends to be some jihadi warrior leading armies. He openly supports the Muslim Brotherhood led uprisings. PLL does have beef with Salafists and goes on violent rants about them. His fellow muslim, Curious Lurker, has had enough of his violent rants. She rakes him over the coals!

Wow, this muslima just went jihadi on him. ProLifeLiberal doesn’t back off and justifies his violent fantasies. 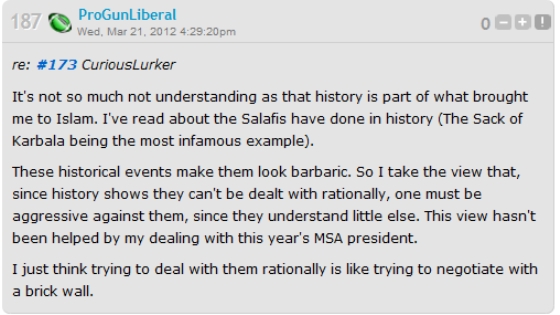 So ProLifeLiberal admits he converted to Islam because he liked their history. I guess a historical record of conquests and genocide is a turn on to this skinny twig looking pasty faced shut in. Curious Lurker doesn’t accept his justifications and unleashes more hell on him! 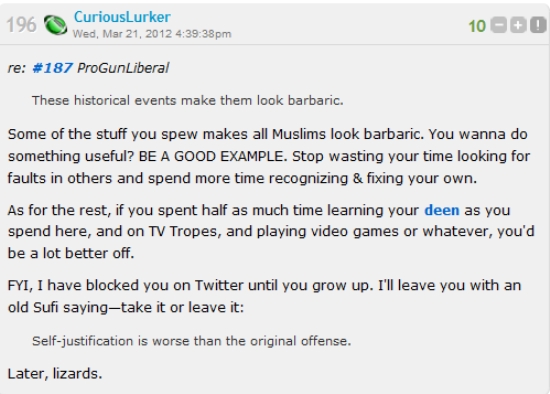 This is like watching al-Qaeda and Hizb’Allah fighting each other. This is a case where I want both to lose. PLL took what Curious lurker said to heart and asked Charles to suspend his account for 7 days.

My prediction is that ProLifeLiberal will be banned if he continues his violent fantasies. Curious Lurker will give Jazzy X Islamic cover from a fatwa for this banning.

98 Comments on “Islamic vs. Islamic pissing match at LGF!”