LGF is the best Blog for Politics!

When the cultists at LGF suck up to Charles, it’s hysterical. Dragonfire1981 praises Charles and Johnson and claims LGF is the best blog for political discourse. 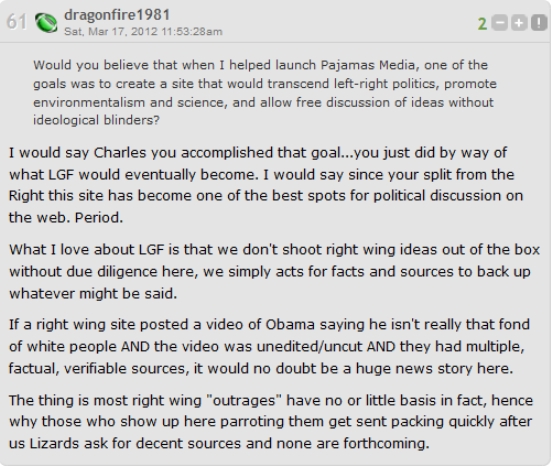 This is such crap. LGF is a Far Left website and only those views are accepted. Charles Johnson is a conspiratorial paranoid shut in and doesn’t engage in political discourse. LGF is all about whatever Charles is emotionally manipulated into supporting.

LGF’s resident town idiot Killgore Trout has been acting odd lately. He is stunned at how Far Left LGF has gone in recent years and has become more confrontational. Killgore was one of the people who helped push it to the left. But as historically is the case, the Hard Left/Marxists eventually push the Moderate Leftists out of influence . This is what has occurred at LGF and Killgore has been on the outs there.

Out of the blue, Killgore Trout asked Charles Johnson a question. He inquired about the reason why Jazzy X left Pajamas Media.  Charles responds by attacking Pajama Media. 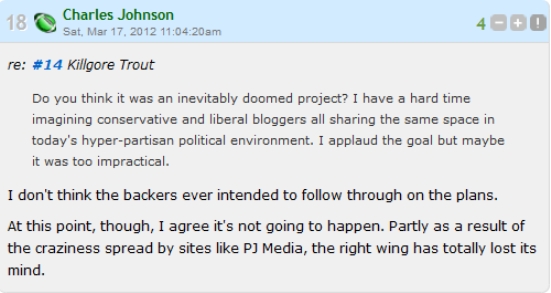 Why would Killgore ask this question out oif the blue? Could Killgore be missing the days he was untouchable on LGF? It’s possible he realizes how deranged and radical LGF has become.

I feel no pity for Killgore Trout’s predicament. He was a rat and helped make LGF Leftists by baiting people so Charles can ban them.

Unlike some on the Right, I don’t get all worked up over abortion. However, I believe it should be restricted, not publicly funded and not treated as a form of birth control. I view people who want unlimited on demand abortions and as form of birth control as heartless and sick people. Even Pro-Choices can agree, that abortion on demand is wrong. Charles Johnson on the other hand totally supports it. He calls himself an absolutist on the issue.

When asked if there was any month, that he would cut off abortions, Charles said no.

Charles then backtracks and agrees with Crypto-Nazi Obdicut that late term abortions never happen. Instead, he paints it as plot against women’s rights. 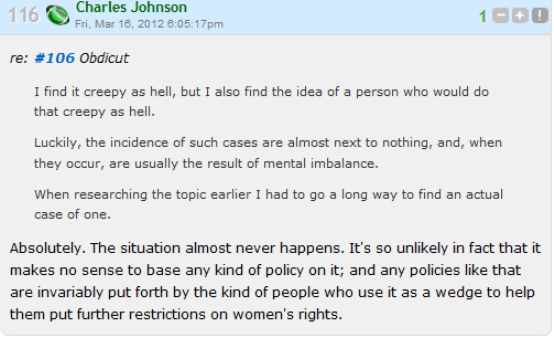 Charles then goes into  how people who oppose abortions have an ulterior motive. He insinuates that opposition to abortion is part of some sinister conspiracy. Clearly he is alluding to his Tobacco company-Ron Paul plot. 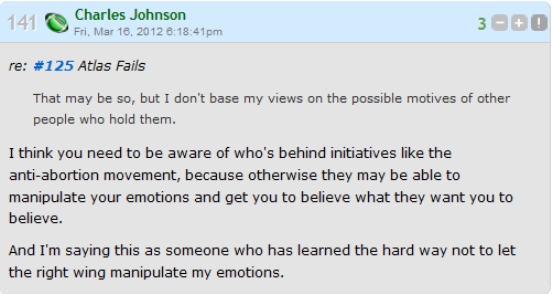 Charles Johnson claims his emotions were manipulated by the Right. How does he know his emotions are not being manipulated now? How can a grown man be manipulated? By making this claim Charles admits he’s not a great intellectual and lacking in original thought.

What sickens me is Jazzy X’s support on abortion on  demand and without restrictions. This is the sign of a man without a soul, which is worse than having no brain.