Update: WordPress.com’s Clumsy Changes to Commenting was a Knee-Jerk Attempt to Block a Single Impostor? FAIL

As more and more WordPress.com bloggers (like us) begin to realize that their commenting system has had a surprise and unwelcome shot to the foot, the confusion and discontent is spreading rapidly. For the moment, we sit here at the mercy of the people at WP.com, hoping that our instruction thread has limited the damage, and alleviated a lot of the confusion for our readers.

While we wait and see if they’ll realize their mistake and/or change this, I believe I’ve stumbled upon what prompted this sudden move:

@photomatt this–this is why everyone loves you. Thank you. 🙂 cc @nikcub @sarahcuda

@photomatt @nikcub you do realize that U hosed countless http://t.co/7Wa6hmVA bloggers and #gravatar users, right? http://t.co/Sb2ZP988

If I’m reading that right, it looks like my theory that this was intended to be a solution to nefarious gravatar/nic-jacking was correct, as this appears to have been done as a reaction to one case (!?) involving a victim of above-average influence on the net? Wow…

Even if it was properly executed (which it isn’t even close to that), it’s a boneheaded sledgehammer solution to a fly-sized problem. The thinking is still flawed, since anyone can still simply steal an image and apply it to their own gravatar account, if they really wanted to impersonate another netizen. Like with an IP, only the webmaster or admin would be able to tell the difference, and even they would not be able to verify which email addy was the legit one, right? To the rest of the world, the commenter is successfully impersonated. For example (simple demonstration, with one of my other accounts): 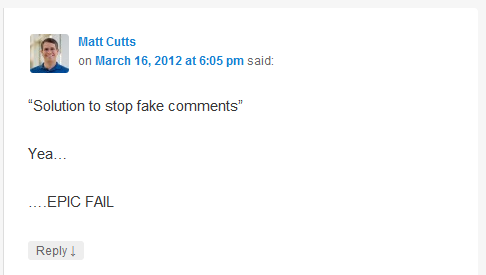 @photomatt BTW- not a quick win at all. As I'll demonstrate, if this was an attempt 2 blok fake comments… EPIC FAIL: http://t.co/ipKN2h7E

Look, people nic-jack all day long, on every corner of the blogosphere. But when it’s done to some big wig at Google, then the rest of us get hosed, I guess. Hopefully they’re smarter than this, and switch it back…soon.

The BRC Crew is sad to announce that the brave sockpuppet who waded into the swamp -past wrenchwench, and even the lizardoid himself, undetected- and checked thousands of user profile pages (and found that a staggering 15,780 lizards were banned)…has indeed been blocked as well.

We’re going to refrain from revealing the real username of this true hero of sockpuppetry, on the (very good) chance that Johnson didn’t actually discover which account had stolen so many strawberries from him, but rather randomly blocked Patches as part of another genocidal lizard extinction event. Regardless, she strolled through the killing fields, stepped around scores of freshly-slaughtered lizard corpses, and completed her mission with perfect success.

Our hats off to thee…

Charles Johnson is just a useful idiot for the Left!

Most of the Left rejects Charles. They see him as an opportunist and a deranged man. I am on the Right but if I wanted news from a Progressive perspective I would go to Huffington Post, Daily Kos, Think Progress or Media Matters. Charles just regurgitates what they post anyway. If you look at it from the Left’s perspective there is no need for Little Green Footballs.

Eric Boehlert of Media Matters retweets some of Charles Johnson’s work. He does it more to dig at the right. That’s why I laughed when Chen Zhen posted this tweet of his!

Very revealing comment by Eric Boehlert. This indicates he doesn’t fully trust Charles Johnson and views him as a useful idiot. How can anyone trust a mentally unstable man?

Update: This was a parody account. My apologies for this post. Just use this to trash Charles.