In the spirit of thoroughness, and since we’re still scratching our heads on this one, the BRC is going to take the opportunity to revisit a memory-holed LGF thread we featured back in October 2010, and update everyone with the complete text and all 79 comments from long-lost #6276.

First, the original screencap I grabbed from the wayback machine (while it was still unblocked by Johnson): 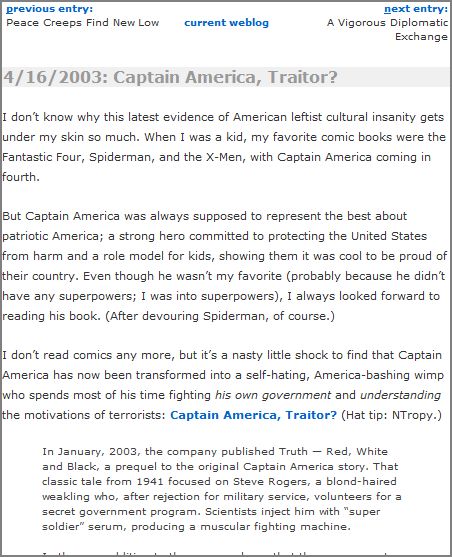 And now, we present the complete thread, as nabbed by ISTE while CJ was asleep at the switch:

I don’t know why this latest evidence of American leftist cultural insanity gets under my skin so much. When I was a kid, my favorite comic books were the Fantastic Four, Spiderman, and the X-Men, with Captain America coming in fourth.

But Captain America was always supposed to represent the best about patriotic America; a strong hero committed to protecting the United States from harm and a role model for kids, showing them it was cool to be proud of their country. Even though he wasn’t my favorite (probably because he didn’t have any superpowers; I was into superpowers), I always looked forward to reading his book. (After devouring Spiderman, of course.)

I don’t read comics any more, but it’s a nasty little shock to find that Captain America has now been transformed into a self-hating, America-bashing wimp who spends most of his time fighting his own government and understanding the motivations of terrorists: Captain America, Traitor? (Hat tip: NTropy.)

In January, 2003, the company published Truth — Red, White and Black, a prequel to the original Captain America story. That classic tale from 1941 focused on Steve Rogers, a blond-haired weakling who, after rejection for military service, volunteers for a secret government program. Scientists inject him with “super soldier” serum, producing a muscular fighting machine.

In the new addition to the yarn, we learn that the government first tested the formula on unsuspecting black soldiers, employed as human guinea pigs. The evil Army scientist in the comic baldly declares: “It’s necessary to see if our methods apply to the inferior races.” White commanders separate African-American GI’s into two groups, one of which speeds away on locked trucks (like Nazi train transports) to a secret laboratory, while the remaining soldiers face mass murder from squadrons of machine gunners (like Nazi Einsatzgruppen). The sadistic experimentation on the survivors (in the PG-rated series) includes horrific panels showing bodies exploding, and laboratory walls splattered with blood. The recent comic unequivocally suggests a heavy-handed analogy to the death-camp experiments of Dr. Mengele.

Joe Quesada, editor-in-chief of Marvel Comics, cheerfully acknowledges the holocaust echoes. “There are moments in our history that may not have been our shining glory,” he told me. “We’ve done things in our history that aren’t right to our own citizens.” He specifically cited the infamous Tuskegee experiment, in which medical researchers left syphilitic black patients untreated in order to study effects of the disease. “The beauty of America is that we can tell these stories and learn from our mistakes and move on.” The messages he hopes to convey to children who read the comics include “the need to learn racial tolerance and that peace is the best way to go, wherever possible.”

This is really sad and stupid. And disturbing, because this stuff greatly influences young boys—and what they’re learning from this new Captain UnAmerican is to distrust and hate their own country.

posted by Charles at 5:05 PM PST
email this article