← Reality intrudes into the Cult
Speaking of Sneaky Edits… →

Charles Johnson’s Lizards don’t like the First Amendment much, especially that pesky Freedom of The Press annoyance. I don’t think we’ve been down this path before.

Oh wait, we have… I remember.

But that was then, and this is, um, then as well.

Charles Johnson won’t do it himself, so he’s got his loyal lizards dropping droppings, but not in the review section this time, because they can’t. They are doing it in the category section, before Pamela Geller’s book has even been released by Amazon. 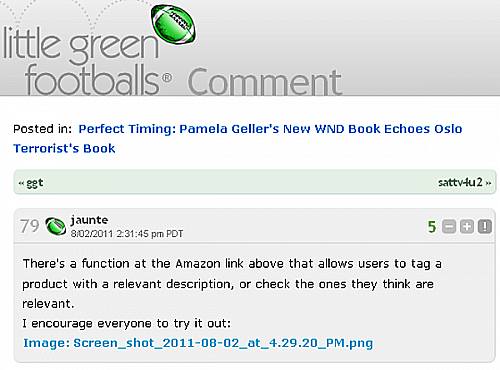 Okay, guess who added those offensive categories? Before Pamela Geller’s book has even hit the Amazon Market, Loyal Lizard jaunte is crapping all over it, just like garhighway and others did the last time.

So who’s up next to chime in on the lizard line?

The Lizardoids are on the march, just like they were a year ago. Does Pamela Geller’s book have anything at all to do with Charles Johnson? Is she a threat to him? Of course not. She’s moved on, has become more successful and prosperous, but Charlie don’t surf. Charlie don’t write, either.

Let’s take another quick peek at the Amazon status, just for fun, to see who’s been messing with it:

Yep. Nice job. Charles I AM LITTLE GREEN FOOTBALLS IT’S ONLY ME Johnson is violating the 1st Amendment rights of others.