Well, it’s been more than a week, and Johnson still refuses to correct, own-up to, or clarify the “retweet” counters and the related deceptive mischaracterization regarding them (although we have noticed that CJ has refrained from any further bragging about the counts since our revelation).  It would appear that, as far as he’s concerned, a “retweet” and a “click” continue to be the same thing.(?)

But wait! Today there’s a Sekrit Thread! I seem to recall the last time LGF had one of those; it was so that CJ could set the record straight about being caught with a busted “views” counter…in private. So it stands to reason that this cyber-huddle with the cultists was called to discuss this latest matter with the tweets.

And thanks to some brave souls who dared to go undercover, we find that we shall not be disappointed:

Ummm….newsflash…CJ’s the one who’s been calling them “retweets” this whole time!

So confusing…Is he being deliberately obtuse? Or is he really that dumb?

Anyway, as we’ve pointed out before, the mischaracterization is especially vivid when it comes to the member-authored LGF Pages, as they are not only ranked by number of “tweets” in a special section of the left sidebar: 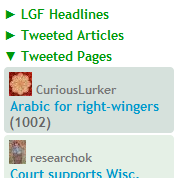 ..but in the right sidebar, the “recent” and “featured” Pages include their own “tweets” counter:

And when you visit one of the Pages, roll your mouse over the counter, and you still see this:

I know we’re getting into dead horse territory, but the number being displayed both on the main page and in the “Pages” section cannot be referred to as “tweets”, “retweets”, or viewed as having any connection to twitter at all.  CuriousLurker’s Page didn’t get 1000+ “tweets” there (we’re waiting to see if he jumps up and down, btw).

Bottom line: We aren’t contending that CJ didn’t explain how the counters really work when they were originally implemented.  We know he did. But he’s continuing to embarrass himself by representing those counts as equivalent to the numbers produced by every other blog’s tweet counter (including ours), and naturally we feel obligated to say something (since all the fact-checkers at the swamp have either left, or been scared into silence).  We’re trying to help here!

Rescued from Memory Hole: “Another Unrepentant Weather Underground Terrorist at the Obama Website”

The Great Strawberry Heist has given The Boiler Room Crew plenty of memory-holed LGF material to sift through, and today we thought it’d be fun to highlight another one of those deleted Obama-bashing threads that were so common in the months and weeks before the ’08 Election.

Before we reveal the screencap, we should add that proof of this thread’s former existence remains on Digg:

As you can see by that snip, the thread wasn’t submitted to Digg until the following day(?). This is important to note when we’re trying to figure out if what we’ve discovered here is another “thread vanishing event“, or if it was deleted a considerable time later. With a little more BSI (blog scene investigation), Engineer No. 2 determined that the thread had tallied ~160 comments, as evidenced by the collection of missing urls “centered” around that article #: 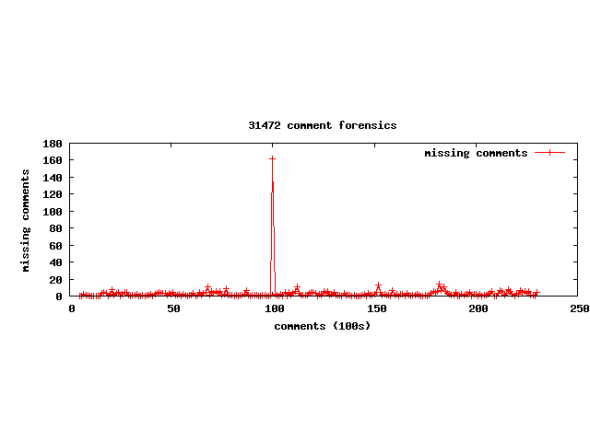 Both of these factors lead us to believe that this thread wasn’t quickly deleted (like in the frequent and embarrassing cases of CJ posting year-old news), but most likely deleted months -or possibly years– later. But why?

Perhaps our DoD readership can tell us. Thus, we present long-lost LGF article # 31472:

Wait!  We haven’t checked the World’s Greatest Blog Search Engine™! Engineer No. 5 had the keys, and lo and behold:

Whoops, it WAS a thread vanishing event after all! Really… no update, no addendum? Just yank a thread and ~160 comments? We shouldn’t be surprised, I suppose…

In any case…another strawberry is in order (I know y’all were jonesin’ for one):

It was a bland, boring week at the swamp last week. The departure of Walter seems to have been the last gasp of independent thinking there.

Below are the bottom dozen or so comments of the week in a GIF with a dozen or so second delay. Click GIF for a montage if there’s a long one you want to read:

Here are this week’s good karma stats. As always, Johnson is the per-comment karma leader. Unsurprisingly, since he was the top most active commenter last week, cannadian club akbar lead in total positive karma accumulated:

Below are the top dozen or so most highly rated comments of the week. Click the GIF image for a montage.