[Courtesy of Johnny Molecule via email.]

Charles challenges his readers to “count the lies” in his recent Fact Checking Breitbart’s Statement on the Leaked Photo post. Charles is correct – there at least a couple of lies in this article. Charles, however, is incorrect about who’s doing the lying. Charles’ extra bad week continues. 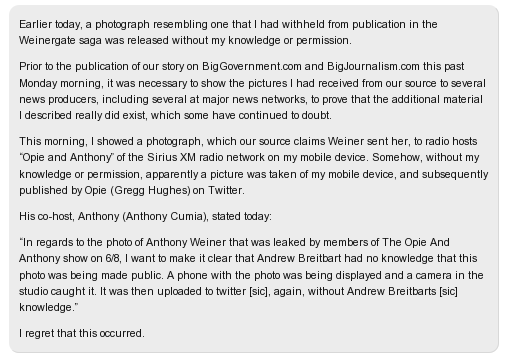 Here’s Charles’ first claim of a lie by Breitbart:

Here’s why Charles claims this is a lie: “How many other people saw the photo that night? It’s anybody’s guess, but claiming that he only showed it to “news producers” is a big fat lie.”

The actual lie here is claiming that Breitbart claimed “he only showed it to news producers”. Nowhere did Breitbart claim that. Lie #1 belongs to Charles Johnson.

Here’s Charles’ claim of a second lie by Breitbart:

Here’s how Charles claims that this is a lie: “Again, this is far from the whole story, because in fact Breitbart passed his phone around to the entire studio.”

Again, the lie here is Johnson’s, claiming that Breitbart is lying because he didn’t anticipate and provide the requisite detail in his press release as determined after the fact by the Sage of Culver City. Nowhere does Breitbart claim he showed his phone to only the two radio hosts.

Conclusion: This is yet another smear of Breitbart by Johnson in a lame attempt to generate traffic for his hysterical, hyper-partisan, risibly inaccurate blog, i.e. FatAss pants on fire!!

Longtime lizard albusteve was given a timeout sometime subsequent to last night’s dustup with LudwigVanQuixote, who reported him to Charles for insulting Miss Ssss, or something. The thread is riddled with comment deletions, it’s not clear if this was a particular transgression by Steve or the accumulation of multiple instances of dickishness, similar to Walter’s fate.

Steve was last on timeout last fall, and returned from timeout rehabilitated and enthused and decidedly more liberal. Will his second timeout have the same salutary effect? When will Steve return to LGF – what do you think?

Update2: Here are some ‘other’ results from the poll:

3:19 am on a thursday
Yes.
WEINER WEINER WEINER LOL!
Weekends only
Sometimes
LGF
Ron Paul should be an option.
after he grovels
albusteve goes back within 48 hours and brings Walter back with him, kind of sh
When the moon is red over one tree hill
Probably.
When Chuckles gives him the reach around

Update: Lood’s in timeout too now: 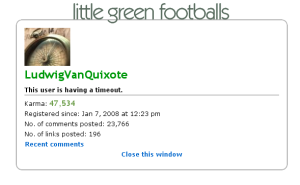 Occasional, St. Charles of Johnson is confronted with the truth.

Triple hit a home run that hit Charles in the head! He goes on to expose LGf’s support of Anthony Weiner.

Recovering from getting hit with the truth, Charles attacks. He once again say, he don’t care about someone’s guilt. He will defend them if Breitbart si the one exposing them.

The truth doesn’t mattter for St. Charles of Johnson. It’s about being the opposite of Andrew Breitbart.

Charles does his whatever man routine and continues to insist, he doesn’t care about the truth.

The only idiot is you Charles.