Here’s a little trick I discovered while gasping for breathable air in the depths of the memory hole (note the comment number):

At first glance, it probably looks like I picked an unrealistically large number at random.  But do you guys remember your first digital calculator?

(red for BEGhILOS, blue for any number up to 8.7 million and counting)

Update:  After a few days, I checked back in, and it appears that CJ has fixed the “glitch”.

The Jazz Man can’t get over his rejection at the hands of Pamela Geller. Since that time, he has done everything possible to destroy her. He even uses a utility invented by a sexual pervert to smear here. Well another day and another Pam smear. 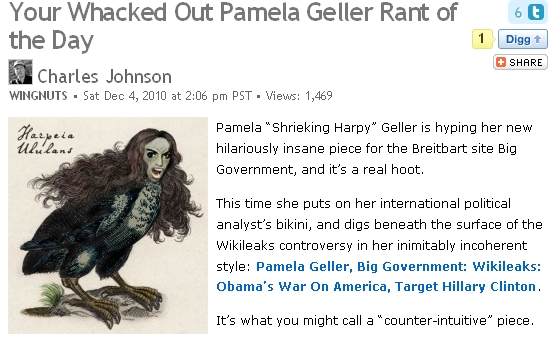 The title is true, this is the wacked out Pam rant of the day, by Chuck. His obsession with Pam has consumed him and he can’t let get over her rejection of him.

Get over it Charles, be a man and move on!

Chuck goes on another anti-Rush and Beck tantrum

Chuck is jealous of those who are more successful than him. He supports wealth redistribution and higher taxes. The Jazz  Man throws a fit that Rush Limbaugh and Glenn Beck are popular.

Chuck has gone bugeyed loony, completely unmoored from reality and addicted to blind rage. He is a failure who deserves no respect.

A reminder of who matters in this world, and it’s NOT Charles Johnson.

Smear merchant and conspiracy monger Killgore Trout is inventing a  story again. He is claiming that Fox News said Israel is blackmailing AMerica. 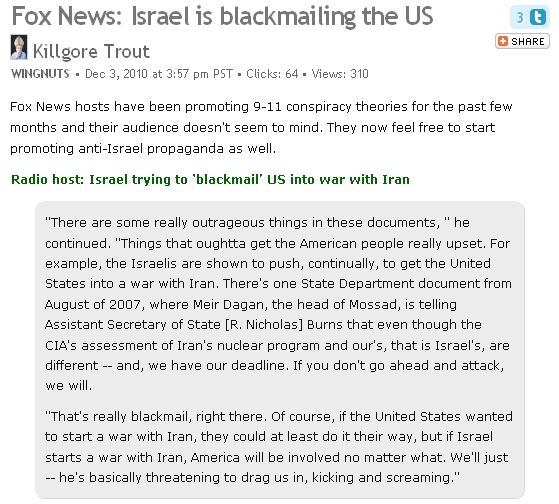 What Killgore is leaving out is this wasn’t on Fox News, it was on 9/11 Truther loon Judge Judge Napolitano’s show on Fox Business. The person saying this wasn’t a Fox News employee, it was a loon from anti-war.com.

What Killgore leaves out is this is standard fare at MSNBC and CNN, not on FOX News. Fox has a variety of views and the vast majority of the Fox employees are Pro-Israel. This can’t be said for other news organizations who are overwhelming anti-Israel.